So, firstly, how is winter in Berlin? COLD!  How was Prague? COLD!  I walk outside and I feel as if my nose could just break right off my face.  I long for the hot, burning sun as my fingers ache inside my gloves, victim to the cruel, frigid air.  Underneath two pairs of tights and pants, an undershirt, t-shirt, long-sleeved shirt, hoodie and jacket, my body quakes and shivers, threatens to become ice.  If, like me, you are from California, you have never, EVER experienced anything like this before.  Good god, it is COLD!
But Prague.  I hadn't been to Prague since September of 2007, and I was excited to see my friend Pavla and also walk streets that were almost (but not quite) familiar.  Have you ever had the feeling that you have been somewhere before, and yet you have no idea where you are?  Not like with deja vu, because it actually IS a place you have been before.  But still, you have no idea where you are?  That was my weekend in Prague.

Prague is beautiful in a different way than Berlin.  Berlin is a bright, painted, in your face kind of city, with murals and grafitti everywhere.  It is easy enough to find the freaks, radicals and queers.  Like a coffins in a flood, the Underground rises to the surface in Berlin.
Prague is old and stoic, lots of historical sites, castles, patinaed church steeples.  Even in the cold, Robert and I walked quite a bit, from the Church at I.P. Pavlova where in September of 2007, Pavla and I got drunk on Burchak.  Burchak is the first wine of the season, made from the first crush of grapes.  It is cloudy and white and still fermenting when you drink it.  It's only available in September and there are outdoor festivals were you can buy it.
But this time, it was cold.  No tank top, no Burchak.

We stopped in at a Restaurant and ate beef cheeks and fried cheese, then walked to the Národní Muzeum.  So strange, walking down the same path as so many years passed, now holding someone's hand.  Last time I was in Prague, I was so, so lonely. . .


We boarded the Metro and went to Stare Mesto.  (I've spelled it wrong.) There we walked in the cold  and found a frozen fountain.  I walked on water.  I felt like Jesus.

Before walking across Charles Bridge, we stopped in at a touristy restaurant for a glass of wine.  They had this clock on the wall.  It reminded me of my late Grandma, May.  She played Baroque Music, and the recorder was her specialty. 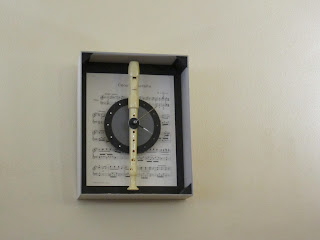 In the evening,  I performed at a womens' "new circus" festival.  And I must tell you, I don't think my piece has ever been more awkward.  But I got through it.  There were some cool acts.  I finally saw Jana Korb on trapeze, and I tell you, she's pretty great!  Also a cool doubles pole dancing act, a fan dancer/illusionist and a Mexican acrobat/physical theater performer who used stacks of newspapers instead of a hand stand bench.  Oh yes, we also ate a strange broiled fish we think may have been a Piranha.
From left to right: Pole dancers, Jana Korb, Piranha!

The next day, we went out into the the frigid air to see what may just be the ugliest structure in all of Prague: the Žižkov TV Tower.  In itself, the Žižkov TV tower resembles something from the old cartoon, the Jetsons.  And then, for some reason, there are these huge, creepy babies crawling all over it.  Really.   The TV Tower is built on a Jewish Cemetery.  It seems that they tore up all the gravestones and put them into a sort of "Tombstone Museum" next to the tower.  Also, there is a preschool next to the cemetery.  Hmm.
After all this, it's really, really cold.  Robert and I wander around and finally find a pub called "ChocoMamba." We drink beer and Becherovka, make a "friend named Tomas who buys us rum and then says "Your turn."  Eventually, we tire of having him ply us for shots and go back to Pavla's.  The next day we get a ride back to Berlin, were I find my living arrangement slightly intolerably.  But maybe it will get better.  Pavla, if you read this, I love you and miss you.  I value our friendship over the yeas and I hope someday we get to work on an art project together again.

Posted by WhatIsWrongWithThesePeople at 1:45 AM