Stranger in a Strange Land

A lot happens in two days when you're in a new place.  I still haven't taken pictures around Neukollon (my neighborhood) yet.  This place makes me a bit shy and nervous.  It's fairly working class and there is not a whole lot of English.  Everyone should give themselves this experience of not knowing the language where they live.  There is a certain sort of being vulnerable in the universe that I feel people who are American might not experience if they never leave.  English is a universal language.  Most people in the 1st and 2nd world have at least heard English before.  There are several people in my country who equate not speaking English with a lack of intelligence.  There is a fear and hatred of immigrants and refugees.  "Why can't they just learn English?"  I feel a great empathy for people who have the chutzpah to cross into the US, legally or illegally, without being fluent in English.
Yesterday was a horrible day.  I tried to buy a monatskarte (a monthly pass for public transit) from the Turkish guy at the newspaper stand and my pronunciation was so bad that I had to show him what I had written down in order for him to understand me.  It cost 74 Euro, which sounds like a lot, but it is much cheaper than paying the fare every time you want to go anywhere.  I left the store ashamed, holding back tears as I walked down Hermanstrasse to the electronics store so I could buy some blank cds.  Seems I forgot to pack a sound cue CD for my first gig (which is tomorrow night.)  On the way I passed a cemetery and I thought to myself, "I could go sit in the cemetery and cry.  No one would bother me because people are allowed and expected to cry in cemeteries.  I wouldn't have to tell anyone I don't speak German or that I only speak English.  I could stop feeling like a disgusting American or an imbecile."  I couldn't find the entrance, though, so I sucked it up and kept walking.  At Conrad, the electronic store, I approach an employee.  "Ich spreche kein Deutsch.  Sprechen zie Englisch?"
"Oh, ja," he says. "You can speak English here.  Is no problem."  And I want to kiss his feet.
He tells me where the CD's are.  I check out without having to say anything except, "Danke," and then decide to wander.  There is a small outdoor market selling handbags, produce and kaffee on Karl-Marxstrasse.  I wander around but don't need anything so I start heading back up my street.  I look down a side street and see trees.  I decide to walk towards them.  A park!  Volkspark is huge and I will explore it again with a camera someday when I am feeling a bit more secure about being here.  There are Nigerian and Arab drug dealers around, but they leave you alone if you don't make eye contact.  I sit on a bench, plug my ipod into the speakers on my kitty backpack, and read my book while listening to David Bowie.  Some dude in a hoodie comes and sits down on the end of the bench.  I scoot over.  It doesn't matter.  He totally ignores me, rolls a spliff and walks away.  After a while it is too cold to stay out.  I didn't bring anything long-sleeved because my dino hoodie was still wet from the wash. 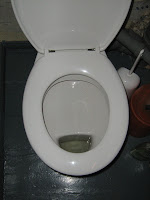 Back in front of my building, I see there is a 1 Euro shop (like a dollar store) across the street.  I buy some crap and come home.  B-- s getting ready to leave for the weekend.  I am excited to be alone in the apartment, which is beautiful.  My room is enormous by San Francisco standards.  The toilet is separate from the bathing room and the walls are papered with envelopes.  The door is all stamps.  European toilets are weird.  There is a small platform with no standing water where you eliminate, and then a little hole with water below it that leads down into the plumbing.  After you go, you flush and all this water sprays across the little platform, forcing everything down the little hole.  You need to scrub the toilet every time you go number two.  TMI?  Just sharing my experience folks.  We're all human, right?
The bathroom is huge and tiled in shiny red.  The walls have a collage of different roses all over and 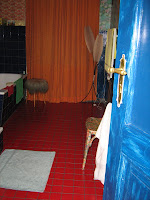 the ceiling is silver.  There are a separate tub and shower.  I took a bath tonight. Yessss! 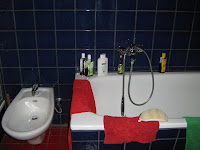 So today I decided that having a good day was imperative.  I fight my shy streak and call Julika, a sculptor and jewelery maker I met at my artist residency in the Czech Republic four years ago.  I tell her I am in Berlin for two months and would like to see her.  She invites me to dinner at her flat in Pankow with her 11 year old son, Neo and her boyfriend Norbert.  That's at 7:30, but at 3 pm I want to wander, so I go to the one place in Berlin that I know: Prenzlaurberg.  Everyone complains that it is so gentrified and all this, but I love it.  This area always makes me feel great!  So after rehearsing alone in my room with the video camera for a few hours, eating soft-boiled eggs and toast for breakfast, getting a German simcard for my phone, I am off on the U-8, which is right outside my front door.  I get off the train at Alexanderplatz to transfer to the U-2.  A Berlin train station is not like a BART stop.  It is a metropolitan area underground.  There are hosiery shops and cafés, places to get your watch fixed and kiosks where you may buy beer, wine and liquor.  On the actual train platform, you can buy alcohol, magazines and newspaper.  And there is no brown paper bag of shame you must wrap around your elixir.  You can just open it and drink it on the train, in the street, anywhere.  No social stigma.  They also sell cans of Jim Beam whiskey that you can drink straight.  Like Budwieser. 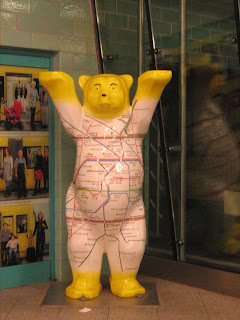 I disembark the train at Eberswalderstrasse and I know where I am!  I wander down Kastanianalee, a street with many shops, galleries, artspaces and old squats, buy a kaffee at the MorningGlory café and sit outside at in an orange plastic chair next to one of the retro-60s tables, then by a tourist map and some postcards.  (If y'all want a postcard, send me your address and I'll do my best to mail you one.)  I finally feel like a normal human being!  Also, I find the language school is still there.  I go in.  "Sprechen zie Englisch?"  (I can say this extremely well! And it's a language school.  Of course the man behind the front desk speaks English.)  I inquire about programs.  There is a one-week class for 4 hours in the morning (20 hours total) for 180 Euro ($248) which includes books and all administrative fees.  At this point, I don't know if I can afford it, but then again, we'll see how the next few weeks go.  My pronunciation is TERRIBLE, my vocabulary minscule, and I want to be able to talk to folks.  I am also considering finding a tutor, a student who needs some extra money, that I could work with, because really, I just need conversational.  Of course, I am a bit of a nerd and really like school, so we'll see what happens.  I think I just need to be a bit patient with myself.  After all, I've only been here 3 days.
I take the train to Pankow around 7:15.  It is only two stops on the U-2.  Amazingly, I don't get lost finding Julika's address, Hydenstrasse 7.  When I arrive, She and Neo are fixing a window downstairs.  There is art dust, pieces of sculpture and grout everywhere.  I immediately feel at home.  Neo is taking English at school, though his favorite subject is biology.  Norbert comes home with bier.  He speaks no English but is very nice.  We try to communicate with each other and can both see the humor in the situation.  What a relief!
Upstairs, Julika's flat is an art storm, the exact opposite of where I am living.  Mildly cluttered, there are knick-knacks and pieces of metal and clay on every shelf.  The only plumbing in the place so far is in the raised clawfoot bathtub, next to the toilet in her studio, which is next to the kitchen.  The pad is downright funky!  I feel the intense pressure of trying to fit in lift from my body.  I am smiling helium.  Neo has two pet rats that are allowed the run of the house.  They are adorable, sweet.  I miss animals immensely, and it means a lot to me that he let's me hold the albino one for as long as I like.  We all contribute to the meal.  I have found a bottle of California wine.  I chose it partially because it was from my home, but also because it was only 2,50 Euro.  I make a salad of tomato, cucumber, apple, artichoke heart, onion and caper.  We have also potatoes, zucchini, and smoked flounder.  Julika sings with a choir and invites me to practice on Monday.  I will go!  It is nice to have a friend.  Also, for the first time since I began my travels, my stomach is sated to the point where I cannot eat another bite, though they all keep trying to feed me.
At 10:30, I depart, wanting to get lots of rest before my first gig.  I am already shaking in my shows.  The 8-minute piece, I know in my bones, but the cake piece is so new and is hard to practice on my own with no one to press play.  That, and I'm having some structural issues with the puppet.  I think I got them worked out, though.  In a panic I sent Tobias, my contact at ZirCouplet, an email saying I wasn't sure about the 3 minute act (the cakedance) and he said we could just decide at tech, which is at 4 pm.  Though I started writing this email last night when I got home, I am now finishing it on Saturday, the 17th at 11:30 am.  It's time to put a tail shake in it, shower, and ready myself for this evening.  I am so nervous I can't tell whether I am frozen or flying.  I hope they laugh!  But one thing is for sure: I'm going to get paid.
Posted by WhatIsWrongWithThesePeople at 2:00 AM