Busking on the Southbank, London 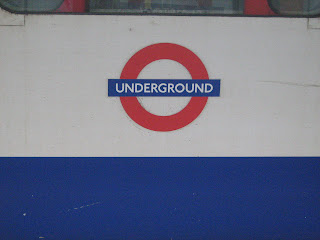 I'm not going to lie to y'all.  London is a fast, difficult city.  Folks don't run for the train here, but folks will run straight into you if you stop moving at the wrong time.  It's just, well, populated! Though I do enjoy the booming metropolis of a big city, I do tend to get a bit overwhelmed.  Now that I have a phone, it will be easier to make plans with- wait, I don't know anyone here!  Oh, hold on a second.  I do know one person, a puppeteer and lighting/set designer named Max that I have worked with in the States.  I email her my number on Sunday night and sure enough, there is a text message waiting for me on my tiny, utilitarian Nokia phone the next morning when I get up.  It's Max.  She lives near the norh London forest and I should go see her.  Okay!  So I hop on the District line from Plaistow station in order to transfer to the Northern line at Euston Station (or something like that) but when I get to the station, the Northern Line isn't stopping there because of planned construction work, so I go up out of the station and walk a block to Euston Square, where I can board the Northern line to Highgate.

I'd just like to take a moment and say that crossing the street here is dangerous and confusing.  Everyone drives like their pants are on fire AND they drive on the opposite side of the road, so if you live in a country (like the US) where you are used to looking left and then right before crossing the street, you're going to want to rethink that instinct or else you just might die.  Ah, adventure.  Enough said.

At Highgate I come out of the station and seriously, my father, the late great Dr. Eric Westheimer must have been having a good laugh, because right in front of me is a store front that says "Neutering your cat prevents felne AIDS!"  And this is true.  If you neuter an FIV+ kitty, they can't pass it on.  There's another veterinary hospital on the corner that boasts "Puppy Parties," whatever that is, and also "Seperate Feline Waiting Room," which I'm sure all the cats appreciate.  I have a few laughs with the ghost of my father and then Max meets me at the Station.

We take a long walk through this amazing, medieval forest.  It is as old as the redwoods of Northern California, but the history here is different.  you can feel it.  these woods were host to knights in shining armor, robin hood and his theives, royal fox hunts.  Camelot, King Arthur, all that stuff that Disney has commodified?  It happened here, where I am standing.   I look up at the dappled sunlight coming through the branches and for just a moment, I am transported to another time, a time where I might be a poor peasant woman, a farmer's wife,  a witch making magic potions to fend off the black death.  (I have an entirely new appreciation for Monty Python, let me tell you.)  I saw a mound of earth that was 6,000 years old!  The ancient feel of the place makes me breathless. 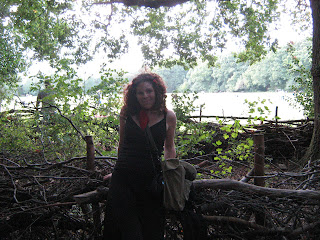 We stop at Max's new home in Muswell Hill, an amazingly ritzy neighborhood where she somehow found an affordable (and giant) room and then wander.  There is an Irish pub in a building that was probably once a cathedral.  I experience Pimm's and Lemonade for the first (but hopefully not the last) time.  Yum!  And then we wander a bit more.  We come upon a street called Avenue Mews.  A mews is what they used to call the alleys off the main rode where folks would tie their horses up when they went to the shop, pub, etc.  There's all kind of great art work on the buildings.  Best of all, Avenue Mews is completely devoid of people at 18:00 on a Sunday evening. 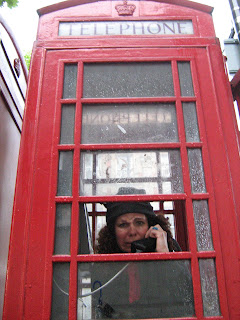 It's dark by the time I head back to the station, so I don't get to check out Queen's would, where evidently there are 100 different kinds of spider!  I will have to have a romp around there when I come back in November.  It will be cold, but a little chill has never stopped me from enjoying the outdoors.  On the way back to Highgate Station, I find two 10 pound notes on the sidewalk!  Thank you, universe

Yesterday, I decide it is time to work, so I take my chicken handbag full of balloons and go to the Southbank of the Thames River.  One is permitted to busk without a permit here.  I set myself a lofty goal of 15 pounds and a time limit of two hours.  Busking is HARD WORK!  I really don't enjoy it one bit.  For me, it is mostly standing around with a ridiculous balloon hat on my head, trying to catch the eyes of children and their parents.  I take donations, never set a price.  I worked for two hours yesterday in the raging wind and made £17!  Alright!  The Southbank of the Thames river is near the Westminster Underground.  The Houses of Parlaiment, Big Ben and London Eye are all there.  Though I am really not into all the touristy crap, I've got to say, all of these landmarks are quite breathtaking.  I briefly consider a ride on the London Eye and then look at the queue.  It is reminiscent of the line at customs to get into this country.  No thanks.  I walk on. 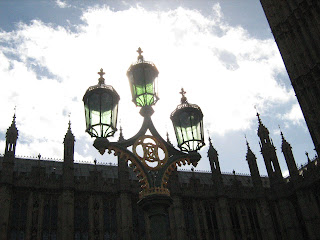 I have been VERY good about being thrifty in this expensive town, but I have also just worked my little tail off twisting balloons in the blustering wind for two hours, and let me tell you, wind is not a balloon sculptors best friend.  In fact, it's right up there with pins and needles.  Plus, I saw a girl at the Plaistow station the other day with the best backpack I have ever seen in my life, a black cat who's eyes are speakers, so you can plug your ipod in and have music.  It runs on 3 AA batteries.  She said she got it at Camden Market.  I don't need a lot of things.  But I NEED this backpack.  I have earned the right to go shopping.

I must digress for a moment and say that the visibility of disabled people here trumps even Berkeley, CA.  Everything is blunt, out in the open.  People talk about issues, don't try to shove them under the rug.  It's refreshing.  Also, I don't know if you can get it in the States, but there is a four part documentary show called "Katie: My Beautiful Friends" about facial disfigurement.  It is hosted by Katie Piper, a model who survived an acid attack.  I wish I had had resources like this when I was young.  This woman is beautiful, incredible, and definitely not a victim.  Really, this show is worth a watch.
When I get off the train at Camden Town this time, I know what to expect and where to avoid.  I also have a goal: find that backpack!  I make a beeline for the market place and see many interesting this, including a new kind of spa treatment, (I shit you not) the fish pedicure:
http://www.guardian.co.uk/world/2011/may/01/fish-pedicure-health-animal-welfare

This is fucking ridiculous!  It's supposed to feel really great, which is why it's so trendy, I suppose.  But, um, weird.  I find several similar backpacks to the one I am looking for, but no kitty.  I leave the indoor market place and check out the outdoor Inverness market.  No dice.  I decide to brave the outdoor market across the street where I got trapped the first day with all the Indian and Pakistani sellers who are like sharks.  "Ma'am, this dress perfect for you!  Buy this!  You need jacket?  Will be cold soon!  Buy this!  I give you special price!"  Uch.  But know I am looking for something specific.  One thing and one thing only.  I see some really unique dresses and sweaters that I almost consider.  But no!  Stay focused!  Kitty backpack.  I find it!  It's £25.  I haggle, offer £20.  The Turkish shop keeper says £23.  Sold!  I am hungry and the only groceries I have at Angela's are eggs, cheese and carrots, plus it is too early to go back to the outskirts of everything.  I decide to relax and wander.  At a horrible tourist shop, I buy a pair of egg cups that say "I heart London."  I came to London with the thought of getting egg cup, because ever since I dated this Brit, I've developed an affinity for soft-boiled eggs.  I justify my purchase with the decision that I will soft-boil an egg for breakfast tomorrow.
I wander some more, down the canal, around a large, cobblestone market called "The Stables," where I find a tiny, independent book store with a paper back copy of James Herriot's "If Only They Could Talk."  I've already decided that, even if it leaves me without a pence to my name, I am going to the Yorkshire Dales when I return in November.  Everyone else in my family went to Italy and lit a candle at some cathedral for my dad.  My connection with my father was different.  Zappa, Van Gough, Fellini, animals.  He read me each and every one of James Herriot's books when I was a child.  So that will be my special pilgrimage.
LED shirts, especially one's that react to sound, seem big here.  The rave scene is still happening, and there are a plethora of blacklight shops.  I see this girl done up in an amazing, candy style.  She is ready to roll and dance all night.  I ask her if I can photograph her and she agrees.  Her name is Rosie and as you can see from the photo, she looks perfect. 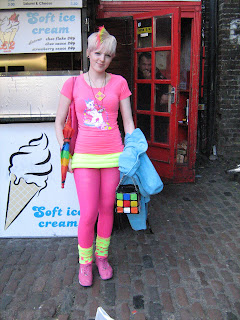 On my way back to the Underground to come home, I come upon a circus shop.  They have clubs, diablos, hula hoops, stilts.  I briefly consider surprising Eve with a brand new set of clubs upon her arrival in Berlin, but realize I can't afford them.
I get back to Angela's around 8 and decide to stay home.  It's been a lot of energy output.  I'm having a mellow day today as well. Tonight I don the behemoth  backpack again catch a bus from Gloucester, (which is near Baker Street Underground Station) and get to Luton airport around 1 am where I check in and then sleep at the gate until my plane to Berlin boards at 5:40.  I land in Germany at 8:55, buy a German sim card for my phone, and make my way to Bridge Markland's flat in Kreuzburg (http://www.bridge-markland.de/) where I'll sublet a room until November 15th.  I start gigging (in a circus tent!) on the 17th! This is what I'm here for!  Hope they laugh!

Posted by WhatIsWrongWithThesePeople at 10:00 PM