Bistroteque and the freaks of London 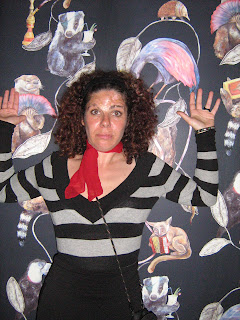 London is a city of stilettos and women who can't walk in them.  You know all those ridiculous things you see in fashion magazines, women who are wearing dresses with waist and necklines that make no sense, too many ruffles and folds, extra large bows everywhere, including their hair?  Well, put that on top of a pair of shoes that might as well be stilts, then add some alcohol so the whole thing totters to and fro like its own personal earthquake, and you've got the London Underground on a Friday night.  Everything in this town seems to be about fashion fashion fashion.  I don't get it.  It reminds me of New York, an okay place to visit, but damn, I am grateful I don't have to live here.  London has never been on my list of "must visit" places.  The reason I'm here is simply a mishap in planning and a rushed plane ticket purchase, but hey, these things happen and I guess there are worst places I could be, though my heart aches for a small town in Eastern Europe where I am the only American and don't speak the language.  Either that or Berlin, city of fools and freaks.  Soon, I tell myself.  Soon.
Yesterday I was in a deeply isolated funk.  I call it the traveler's blues, when the glamour of travel has taken a nap and one realizes how far they are from home, from any sort of emotional safety.  When one realizes they haven't had a conversation about anything real with someone in what seems like weeks but is actually a few days.  When one realizes they have given up their cat to face a dream that may or may not work out.  It's hard, traveling alone, especially when you've money concerns.  I try to figure out what to do with my day, finally decide to plan a route, get out of the house.
At Plaistow Station, I try to fill my Oyster Card (a refillable fare card for buses and subway.  You can buy a day pass or a week pass.  Since I'm here for less than 7 days, I get a day pass.)  It seems I forgot to tag out when I got off at Plaistow the other night and I get scolded.  I apologize and promise to be extra careful next time.  The last thing I want is for Angela's Oyster card (the one I'm using) to get canceled.  They fix the problem and I get on the Hammersmith & City line Westbound, transfer to the Piccadilly line at Holborn, and get off at Covent Garden.  I want to see the professional buskers.
The buskers at Covent Garden are chosen by lottery (daily or weekly, I'm not sure) and are permitted to busk all day.  Supposedly, if you get chosen, you can make a lot of cash.
The place is loaded with tourists and reminds me of Pier 39 in San Francisco.  It is, in a word, atrocious.  I go into a busy shop, buy a few postcards, and go check out the talent.  I am fairly underwhelmed.  These artists are working hard, but it's your run of the mill human statues and one fellow who has gathered a crowd doing a sort of human freak show, balloon swallowing, pounding a nail up his nose, nothing so special.  I get more and more depressed.  I feel like a tourist, but I don't want to go see Big Ben or the London Eye.  I want to work.  And I don't get to do that until I get to Berlin on Tuesday.  Besides, the most talented busker I have seen was performing illegally in Tottenham Court Road Station, where I disembarked accidentally.  A man with dark skin playing the guitar and singing Flamenco.  I gave him 50p, and stood listening, entranced, ignoring the hustle and bustle around me. 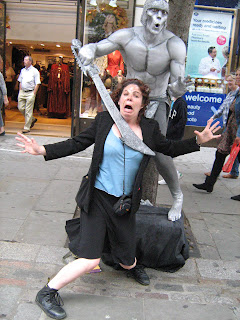 I leave Covent Garden as quickly as possible, deciding that I must go find a simple coffee shop to read my book and write a postcard to Violet and Helena, the girls I have nannied and babysat for the past 3 years.  So I hop on the Central line and get off at Stratford Station, which is also near 30 West Rd E15 where I am staying.  (E15 3PY is the postcode and I'm not exactly sure what it is for, except you cannot find your way anywhere if you don't know the post code.  Little tiny differences in culture.  They are subtle but several and always important.)
I disembark the train and look for somewhere quiet, but all that is there is a huge, busy shopping mall and a few Starfucks (they're EVERYWHERE!  So sad.)  I am so annoyed I just decide to go home for a bit, but the map I have is confusing so I opt for the bus.  That, of course, poses another set of problems.  I have become quite good at navigating the train system here, but the double decker buses are another story.  I realize I am lost.  I do not know which way is east or west, up or down.  Deep breaths!  There are several Muslims around.  You can recognize them by their unique garb which look to me, (with all due respect) like pajamas.  I ask a young Islamic man if he knows what bus I take to E15.  "Let me see," he says and whips out his iphone.  He gets me my route and makes sure I get on the bus safely.
There is a lot of intolerance out there toward Muslims.  People say they are misogynists, violent terrorists and the like.  To all those people, I say, "Go to hell."  This man helped me get home safely.  I would have been lost without him,  He was sweet and peaceful.  In fact, every Muslim person I have met here (and there are a lot of them) has been extremely kind to me.  More so than the native white Brits I have met.  Possibly, the fundamentalist Christians in America could learn something about how to treat people from the Islamic in London.  Me, I'm not a fan of organized religion at all, but I am grateful to this benevolent, bearded middle easterner for helping me find my way.
At home in Angela's apartment, I change, put on glitter, and get ready to go out to Constructed: An Experimental Cabaret at Bistroteque, a small club in Bethnal Green.  I'm looking at the outing as a business venture.  Maybe I can get booked there in November, when I come back to London for my flight home.  I ascend from the Underground into a neighborhood that is a mixture of Middle Eastern and students and begin to look for the venue,  passing the side street three times before finally going into a restaurant and asking where Wadeson Street is, telling the nice Italian waiter the name of the venue I am looking for.  Every word he speaks to me makes me feel like a queen.  It is like this with every Italian man I have met.  They know how to make me feel special just by saying hello.  Misogyny, sexism, whatever.  It's nice to be treated like a lady.  Maybe next time, I'll go to Italy.  I wonder what sort of trouble I might gt myself into there?  Hmm.  Alfredo, the waiter, tells me that I have passed the street I am looking for.  It is one block down.  He says that Bistroteque has no signs but I will know it when I see it.  He asks me my name, where I am from, and does that kissing both cheeks things that the Italians do.  It is a cultural anomaly that I love, a freedom of the body and a willingness to connect that is lacking in the US.  It makes me feel open and free to possibility.  It makes me feel safe, the thought that human contact can carry with it know expectation or contract.  I thank him and am off. 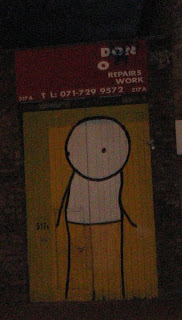 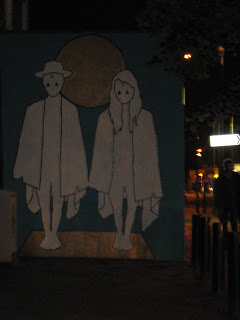 On a little side street, I see a table with someone smoking.  This must be the place.  As I get closer, I see two signs, one that says "Bar" with an arrow to the left, and one that says "Cabaret.  An arrow points to the right.  I enter the bar and, lo and behold, finally, I have found the freaks of London!
The wallpaper is atrocious and lovely at once.  Black with all sorts of critters.  A badger drinking a mai tai,  raccoons and otters with fancy fans, a marmoset (?) playing the concertina.  The lamps that line the bar are made out of reclaimed Bombay Sapphire Gin bottles.  There is a queerness about the place that makes me feel like I am home.  I order a wheat beer and enjoy the scenery until it is time to go to the cabaret.  And then, oh, yes, the night begins.
A dimly lit room vaguely resembling a black box theater, save for the bar at the back, a large disco ball mounted on the ceiling, and a large mirror covering the expanse of the north facing wall.  Small, round cafe tables provide audience seating.  Everything is pointed toward a tiny platform that is the stage.  There are velvet theatre blacks (curtains) and a matching chair and microphone.  The show is called "Constructed," and it's experimental cabaret.  I recognize  a woman in black with a stopwath in her hand as the stage manager and make a mental note to talk to her after the show.  The pre-show music is Serge Gainsborough, George Michael, a Michael Jackson mash-up.  This show may be rough around the edges, but I can tell it's going to be good. 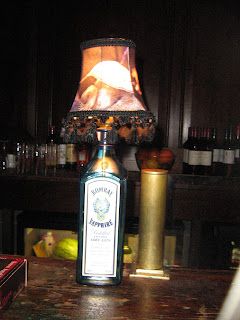 We begin!  The MC is a darling yet commanding drag queen named Myra Dubois.  I am simaltaneously in love with and intimidated by here.  The acts are a stand-up comic named David Mills who made me laugh, a drag act/physical theatre performer by the name of Blanche Dubois who did a satire on Mexican soap operas that would be considered extremely racist in California but was nonetheless hilarious, a performance artist by the name of Helen Noir who may have been onto something but her piece was very much in progress, too long, and had a message that was very unclear, and a German-style cabaret act by a woman named Scarlet Billows, whom I found extremely captivating although it was obvious she had been working without a director.
At the end of the show, which was about 90 minutes, I schmoozed up the SM, got her email, and as soon as I'm done writing this, will email her a video and ask her about getting booked  in November.
On the way back to the tube (which is what the London Underground is called) I noticed some amazing street art.  No, it's not Banksy, but I think he's a bit overrated anyway.
Today I think I'm going to the London Forest because, although the Southbank festival is going on and I am sure there will be incredible things to see there, I have absolutley had it with tourists and I need some nature.  I wish I had time to visit the North Yorkshire Dales where James Herriot practiced veterinary medicine and wrote about it, but I don't.  Maybe when I come back in November.  Sure, it will be cold, but that hasn't stopped me before.
Posted by WhatIsWrongWithThesePeople at 3:00 PM