Circus, Disability, Cops in the Head 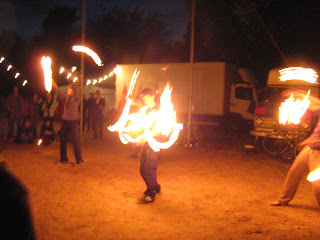 First, a cheers to small successes:

My sim-card was running low.  I slip on my sandals (it's sunny today) descend the five flights of stairs and walk down the street to the cell phone shop.

The guy behind the counter asks, "Zwanzig?"

He presses some buttons, hands me back my phone.  "Danke.  Tchuss."  And I walk out the of store.  No English!  First time.  It is a microscopic thing, this interaction, but something
something
is starting to happen.

I feel blessed to have fallen into the crowd of people that are surrounding me.  Last night I went to a circus-varieté/cabaret at Zirkus Zack.  I wasn't sure if anyone I knew would be there except Jana, who was the stage manager/director.  I was a bit nervous about finding the place, but it was very near the Ostkruez S-Bahn stop.  I walk into a compound that feels like burning man.  The ground is packed dirt.  There is a permanent bathroom but everything else seems fairly mobile.  Some trailers, one of which is a concessions stand.  At this point, I am quite used to not understanding most of what is being said around me.  I don't feel self-conscious about being alone.  In fact, I feel strangely safe.  But I do get a little bored sometimes.  I see a child about age 4, take out my balloons.  "Hallo!  Hund oder Katze?"  The child looks at her mother.  I say to her mom, "Ich speche kein Deutsch."
Mom smiles, says to kid, "Hund oder Katze?"
"Hund."  The child says, so I make her a balloon dog.
There is another child, "Hund, katze oder blumen?"
"Blumen." She gets a flower.
An area in the dirt is cleared and fire arts start, poi, staff, some crazy looking apparatus I don't know the name of that resembles a staff but has big flaming rings on the end.  I feel like I'm in Black Rock City except this is real life.  An announcement is made.  I don't understand what is said, but everyone lines up by the tent opening to go inside, so I follow. The old adage, "If everyone else jumped off a cliff, would you do it too?" comes to mind.   There is a certain amount of trust I must put into those around me these days, I suppose..
"Harvey," a familiar voice says my name, though it is not one of the Israelis.  I turn.  Tobias, with his wavy salt and pepper hair and prominent nose saunters over to me.  "Hallo!   Come, Vie are closer in zie line."  Tobias has this amazing accent, soft, gentle, precise.  He is from Southern Germany.  I wonder if they all sound like this down there.  I join him, his girlfriend Jule and their friend Robert.  They all speak English.  Tobias and I start to talk about heady stuff, performance theory and psychology, but he doesn't have the English for the more complicated terms, and I definitely don't have the German.
Inside, we sit together.  The Israelis show up and Sharon comes and sits next to me.  The show begins.  The premise, a hotel. Clowns, aerialists and acrobats tell a story line that is possibly a bit thin, but then again, I cannot understand what is being said onstage.  The talent is amazing.  There is breathtaking sole tissu act, some very talented jugglers, and a few incredible clowns.
There seems to be a different set of taboo here in Berlin than in California.  Even is San Francisco, I feel that references to sexuality and gender in the media  are somewhat marginalized and most definitely only for 18+.  On the other hand, violence is not only accepted but expected.  We Americans are addicted to guns, to war, to blood.  Here, it is rather opposite.  While this wasn't necessarily a family show, there were definitely people with kids there, and there was a lot of sexuality happening in the clown work on stage.
There was a cross-dressing man who played both male and female roles in a tryst under the sheets, complete with the sounds of creaking bedsprings and then acted as the woman who had to get out of bed to pee and wanted to get back into bed for another romp.  A female clown did something with cigarettes, stole cigarettes from someone in the audience, and then sort of freaked out and told the audience that we should all love each other RIGHT NOW!  There was a sort of slow build to all of this.  I believe the act was about desire.  Or something.  Whatever it was, it made my sides ache.
My favorite part, though, was two naked men in a bathtub.  I am told that this is a copy of a sketch by a famous German comedian who just died, (http://www.guardian.co.uk/world/2011/aug/24/germany-comedy-loriot) I am not sure what they were talking about, however I believe some of it had to do with penis size and that the water was cold, and that the rubber duckie was an intruder and not allowed in the tub.  They both took turns standing up (multiple times) and revealing that they were indeed naked and one was possibly Jewish (if you don't get it, ask someone else), manhoods, wobbling around unashamedly.
This would never happen in America.  Not in a million years.  Berlin, Ich liebe dich.

But there was something that happened to me inside.  See, I have always had this rocky relationship with my body, not how it looks but the way it moves, the things it is capable of.  I'm a brain injury survivor, grew up with words like "special" and "disabled" pasted onto me.  These labels were meant to help me by helping others understand me. (At least, that's how I feel about it now.)  But because of these labels, I was allowed to think movement was a scary space, and also a space that I was excused from inhabiting.  In graduate school, I had to learn to dance.  It was terrifying.  I didn't want to do it.  I almost dropped out.  I almost got kicked out.  I would run out of the studio crying and lock myself in the bathroom like a child at the simplest request to cross the floor in a group improvisation.  I had nightmares and insomnia at the same time.  Cold sweats, dry mouth, the whole thing.  Phobia.  It. Was Not. Fun.
But then this thing happened, where I looked across the circle we were sitting in and realized that we were all fallible. Specifically, it was that someone else in the class (a person I thought was a very graceful mover) couldn't touch his toes, either. And I started to have fun.  And I started to love to move.  And I started to dance.  My second year of graduate school, I went to circus school, and it was a place I definitely did not belong.  It was the polar opposite of the loving support from that first year of my studies.  There was only one right way to do things, and I was not doing it.  I tried and tried and tried at juggling, acrobatics, rolla bolla.  And then my dad had a stroke and all my strength, effort and will power went elsewhere.  The circus became a door that was closed to me.  There was no love for me there, no ensemble, only judgement and alienation.  So I've had a pretty bad attitude toward the circus for about 5 years.
But I come here, to Germany, to Berlin, where all of a sudden, the type of person I am is no longer oppressed.  Jewish, queer, an artist, I may not be rolling in the dough, but I feel so safe here.  Safer than I feel in San Francisco, anyway.  The first place I perform here is a circus tent.   The first person I meet (beside Tobias) is an aerialist.  I don't say anything about my head injury. No one asks me about my scars, the way I move.  I am a clown.  I make the audience laugh.  That is good enough for them.
Watching this show last night, though, all these things bubble up inside me.  Things I thought I left in Amerika but things I can't leave in Amerika because they are inside me. They will come with me wherever I go.  I am not going to do even the simplest acrobatics.  I am not going to juggle.  My left arm will never straighten.  I will never in all my days be able to bear weight on it or effectively straighten it without having minor surgery and physical therapy (and I just don't have the insurance for that, thanks USA.)  But none of these people know that, none of them are asking and none of them care.  I don't need to validate any part of myself to anyone.  I am a clown who has come from Amerika.  That is all and that is enough.
In this city, I will never need a driver's license because the transit is so amazing and the streets are safe.  I can be an artist and no one questions my contribution to society.  I am not angry here.  I feel like I have a place.
The learning curve for this language is slow, but I can handle it.  I wonder if it is time to put my old baggage to rest, to dump it somewhere, to emerge, to transform.  I am beginning to have real, true conversations with people and this seems like a difficult thing to translate from die Englisch sprache.  Though it is true, no matter how far we run, our pasts will be with us, no matter how long we wait, until the oceans run dry, this stuff will be there.
Posted by WhatIsWrongWithThesePeople at 1:31 AM