Getting There Is The Hardest Part

After having my flight canceled and spending the night in a posh hotel which I was too tired to appreciate, I arrived at the Montreal airport at 6:30 am.  Air Canada had given us meal vouchers for the hotel, however I had already eaten an overpriced soup and sandwich at the airport.  I ordered a Stella and a chocolate ice cream at the hotel restaurant, only to find out that the voucher would not cover the beer.  The waiter was handsome, apologetic, and called me "Love."  I paid for the beer and tipped him.  At midnight, after showering to get rid of what I call travel sweat, which is the kind of muggy perspiration that comes with a combination of luggage and processed air.  Tossing and turning, I couldn't sleep.  What if I couldn't get ahold of Angela's roommate to let her know that I would be showing up at night instead of during the day?  Who was going to let me in and show me where to sleep?  I hadn't made any arrangements for a hostel and had no plan B.  I checked my email in the morning and Symmone had replied, telling me that should would be at work and to stop off there on my way to the house.
The upside of having the flight cancelled the night before was that the flight they put us on at 9 am was nearly empty, and even though I was in coach I could stretch out as if I were in first class because of the vacant seat next to me.  I was careful not to sleep on the plane too much, wanting to be tired when I arrived because it would be night time.  This is a great way to beat jet lag!  The flight went by quickly, of course getting through customs took two hours.

It is extraordinarily weird to be in another country where everyone is expected to speak English.  I am not sure if I like it.  True, I don't speak any other languages yet, but there is something about being an alien and not speaking the language that makes me feel good, like I don't even have to try to fit in anywhere.  I feel like it is so easy to communicate with people here that part of me does not even want to try.  Of course, I'll be in Germany soon, and that will have it's own set of challenges.

After finally making it through customs, I yanked my 42 pound beastpack off of the luggage carousel and made my way to the London tube.  I am very happy to say that I did not get lost!  The London Underground is amazing.  It's fast and it goes everywhere.  I boarded the Picadilly Line at Heathrow Terminal 3.  On the train was an adorable black girl (she must have been about 5) with her mom and dad.  She was excited, greeting everyone on the train.  "Come aboard!  Come aboard!"  She sang joyfully.  Tranfering at Holborn station to the Central Line, I rode 5 stops in a train car full of drunk party people, the women all dolled up in heels and the men in button down shirts and sportcoats.  I tried my best not to offend anyway with my huge pack.  An Indian man attempted to help me.  I politely refused.  "Do you know where you are going?"
"Liverpool Station to pick up a key.  Then to where I'm staying."
"Where are you staying?"
I smiled.  "I'm not going to tell you that!"
"Oh no, I am just being friendly."  He laughed.  "I am gay.  My partner is standing in back of you.  Where are you from?"
"San Francisco," I said, letting my guard down a little.
"We were just there in June and July."
"Did you have fun at Pride?"
"It was a great time, but I did not expect California to be so cold in the Summer.  Oh, this is your stop."

By the time I got to Liverpool Street, it was 23:45.  Pulling myself and my luggage up the stairwell and through a cobblestone street of drunk men in there 20s and 30s, I made my way to the Andaza, a 5-star Hyatt hotel with high ceilings and glittering chandeliers.  Ever walked into a ritzy hotel looking like a sweaty backpacker from hell?  My advice is don't.  It's just, well, awkward.  "I'm looking for Symonne."
"Oh, she's in back,"  one of the receptionists said.  "One second."
I have never been so glad to see a stranger as I was to see this tall, bespectacled blonde.  Symonne gave me the key, printed my a google map, and told me to get on the Hammersmith & City train, riding it to Plainstow.  From there, it would be a 15 minute walk.  Again strapping my behemouth pack to myself, I again descended into the station.  The walk was short and quiet.  I reached 30 West Road E15 3PY without a hitch.  The house looked a bit like what I picture the Dursleys (reference: Harry Potter) living in, a white house with a deadbolt lock up high on the left hand side and a nob right in the middle.  By the time I reached the place, it was around 1.  I went to bed by 2.  No jet lag today! 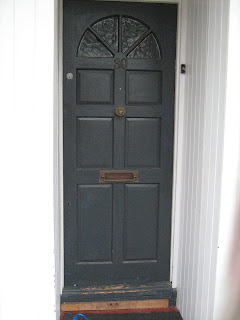 I woke at 10 and took to long getting ready to leave the house.  My first day in London and Angela had left me a list of places I might enjoy visiting.  What to do?  I decided to take the tube to Camden Marketplace, which is like a giant flea market/tourist trap.  Camden  reminded me of Haight Street, except instead of their legacy being the Grateful Dead, it's the Sex Pistols.  Guys with multi-colored liberty spikes and leather jackets held big signs, "Piercings and Tattoos." There were a million t-shirt, shoe and head shops on Chalk Farm Road, and inside the marketplace, Indian and Pakistani men tried to sell me dresses.  London is an incredibly diverse city.  I'm in a largely Turkish neighborhood, but there are also Indians, all variety of Asians, and many black people.  I have not seen anyone from Central or South America yet, but I am sure they are here as well.  This place is a real cultural hub.  One thing though:  The white people here are WHITE!  Really White!  Like, Patricia Routlaedge white!  Old pasty biddies who love the queen and the royal wedding white!  Bizarre.  I got some overpriced fish and chips and sat next to a table of what looked like the cast of Father Ted.  (The show is Irish, and yes, I know that the Irish have been oppressed by the English, but on my barometer of "whiteness," the two are equal.  Maybe I'm not being culturally sensitive.  I would say I'm sorry, but well, I'm not.  My people are Jews.  The Irish don't have nothin' on us!) 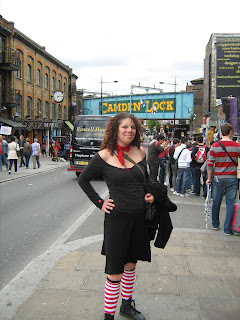 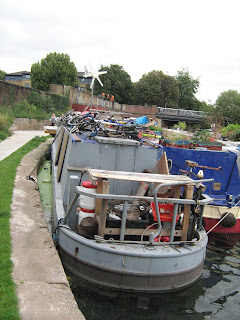 I did discover what I think might be my new favorite soft food.  Mushy peas!  They are, you guessed it, mushed up peas with some sort of lemon and tarragon(?) spicing.  Delicious.
I met a few tourists from Atlanta and we took pictures for each other in front of Camden's Lock, another tourist attraction.  And then I escaped touristland.  I walked along the Jubilee Greenway, which runs next to the Regent's canal, a human-made waterway that runs through London.  It's beautiful except for the fact that it's filled with trash.  Many people moor their houseboats along the greenway, where locals jog, ride their bikes, and walk their dogs.  I walked a good mile and a half, meeting along the way an old Englishman named Dave who was fishing.  I actually saw him catch a perch, but he threw it back because it was too small.  I walked all the way to Islington, where, among other things, I saw a sign for the Lewis Caroll Children's Library.  Is this creepy to anyone?  Yes, he wrote for children, but he was also a pedophile. 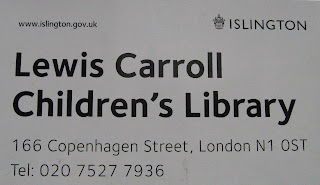 Hopping on a double decker bus without knowing where it was going, I ended up at King's Cross where I finally bought a pay-as-you-go nokia phone and vodaphone sim card.  Now it's a little after 18:00 and I wonder what I'll go this evening.  What does one do at night in London when not carrying around a 42 pound backpack.  We will see.
Tomorrow it's either Covent Garden to see the professional Buskers or twisting balloons on the South Bank of the Thames, the only place in London you don't need a permit to busk.  I'm going to need to do some of that before I go, because this city is EXPENSIVE.
Posted by WhatIsWrongWithThesePeople at 7:00 PM