Oh mein Gott!  Where do I begin?
On Saturday morning I caught the train with Robert and his sister Ricarda.  We were going to Rostock to spend the holidays with his mother, father and grandmother, none of whom spoke English.  I was nervous and anticipatory.  Really, it's an opportunity I have been waiting for, to be around people where English was not an option.
Robert's dad picked us up at the Rostock Hauptbanhof and we immediately went to the Supermarkt, where they had clear, blimp-shaped containers filled with water and weiners (a kind of sausage.)  Unfortunately, I did not get a photo, but I believe it would have been amusing to my American readers.  Oh well.
After the Supermarkt, we went to Robert's parent's house.  Made of bricks, two stories and an attic that had been converted to a guestroom.  The whole house, sans kitchen, bathroom and stairs, was carpeted in smooth pistachio wall to wall carpet with shiny black and marble accents.  I had been in the house about two seconds when Robert's mother came downstairs and instructed me (in German) as to exactly where and how to hang my coat.  She didn't like the way I had down it the first time.  Though frail in her looks (Gela suffered a stroke some years back) this woman rules her house.  Her rules seldom make sense.  The one thing that was made pretty clear, though, is you sit were she wants you to sit and you do what she wants you to do.  It sounds scary, but found it rather funny.
After our arrival, Robert disappears and I am left in the kitchen with Ricarda and Gela.  We stumble around in language.  Mostly I just listen to them talk.  I excuse myself to take my backpack upstairs.  Robert is lying face down, naked, under a sun lamp.  I sit on the bed in the corner and get my book out.  A flurry of whining, German and louder, protesting German flies up the stairs.  Gela comes in the room, her voice heavy with the weight of children who don't appreciate her enough to wait on her hand and foot.  "Robert, warum [German german german?]"  She points with her good arm and scolds at him to do something.  Ricarda comes in, snaps at her mother, picks up a bag and storms out.  Robert is now standing, naked.  He says something to the extend of, "I was just trying to relax for a second!"
I throw him his underwear and Gela commands him to get in a tiny, dusty storage space and pull out a few bags of bedding.  Than she leaves.  But in 5 minutes, "Robert!"  All weekend was like this.  I can see why he doesn't visit so much.
Robert and I went for a walk and I saw the Baltic Sea.  The weather reminded me of Ocean Beach in San Francisco, windy and cold. 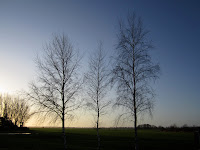 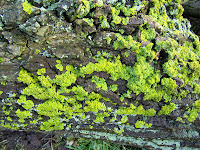 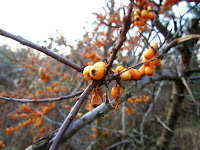 Dinner was about as unJewish and also as German as I think it gets.  Potato salad and sausages. Delicious! 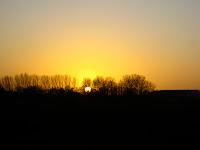 I really had a lot of fun.  Robert's father was very patient with me and my attempts at Deustch and his Grandmother was terrific.  That night we all drank a lot of wine and his Oma and I had a lengthy (if simple) conversation about classical music.  After we were all quite drunk, his father decided that it was time for to learn some English.  Okay!
We did some simple things: How long have you lived here?  What color is this?  This is green.

The next morning breakfast is brotchen, (bread rolls) cheese, boiled eggs and ham.  And of course coffee made with a sleek and expensive coffee maker that grinds the beans for you.  In the afternoon, Robert and I took a two hour walk through Rostock to meet his family at an Asian (Japanes/Chinese/Thai) restaurant for an all-you-can-eat buffet.  Robert's mother took photos of the buffet.  Then photos of us, then more photos of the buffet. 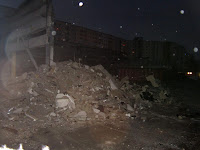 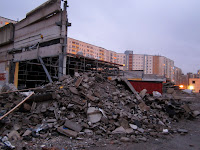 These two photos were taken atthe same time, about 4:45 pm.  The one on the is with a flash, the one on the left without.  Look at the weird particles and reflections in the photo on the right, and how it looks so much darker.  Strange! 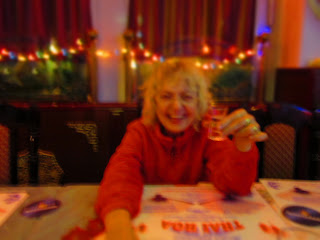 After the buffet, Robert and I were going to walk home, but it was raining.  So Everyone but us got in the car with the agreement that we would wait for someone to come get us after the others had been deposited at home.  (The car had only 5 seats, but there were 6 of us.)  Robert and I were just sitting down to enjoy a drink when, guess what, Gela decided to come and keep us company!  Sensing this could be very bad, I turned the tables on her.  I took out my camera and suddenly she was the star.  This made her VERY happy.
This morning Robert and I slept too late and then had to rush to eat breakfast and strip the bed we had slept in.  Ricarda drove us to the Rostock Hbf, where our ride that Robert found via http://www.mitfahrgelegenheit.de/
It cost us only 10€ each to get back to Berlin.  My German-English dictionary was waiting for me upon my return!  Robert has loaned me some comic books from his childhood.  These, in combination with Lindenstrasse shouldhelp me with me language learning.
Tune in shortly to hear about how Robert and I accidentally ended up in a Right Wing (Nazi) bar!

Posted by WhatIsWrongWithThesePeople at 3:34 PM