On Saturday evening I went to meet Sam, a guy I had met a few times in San Francisco through our mutual friend, Kai.  We were meeting at the Volksbühne, a popular theater in Mitte to see a free play, "Weinachten mit der Addamsfamily."  Sam is only in Berlin for two weeks.  He speaks four languages, but German is not one of them.  Still, he is trying and feeling that very familiar American guilt of having life be easier because he speaks English.
"You're here for two weeks.  Relax.  It's a tough language."  I tell him.
The play will be in the second floor lobby of this very posh theater, and the whole of it is done up in goth glory.  Black lace and chiffon drape the sparkling chandeliers hanging from the high ceiling, and there is a withered Christmas tree with doll parts and plastic skulls dangling from it's branches.
The play starts, and I am impressed by the physicality, the commitment of the actors.  Of course, there is a lack of character depth, but the play is a comic book, really.  Of course it is all in Deutsch, and again I am impressed by how much I understand.
The play lasts about an hour, filled with the antics of Wednesday and Pugsley as they try to kill Morticia's new baby. 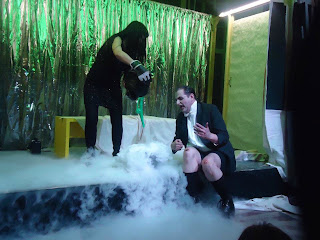 After the play, it's still early, about 7 o'clock, and Sam is up for a stroll about town.  We go to the Weinachtsmarkt at Jannowitzebrücke.  This particular Weinachsmarky is more like a carnival with rides and games where you can win things.  It's the type of place I love and hate at the same time, huge beer drinking crowds, lots of noise and flashing lights.  It's amazing and repulsive.

Sam and I wanted to go on the Ferris Wheel, but it cost 5€.  We decided to take our 5€ and spend it at Silver Future instead.

Over drinks, we talked about similarities and differences between the Bay Area and Berlin.  The main thing that I have noticed is that in Berlin, I don't have to explain that though I identify as queer, I am not gay.  I don't have to have the "What is queer?" discussion with folks. Culturally, they just kind of get it.  I like this!

Yesterday was my birthday and it was a good one!  In the morning I schlepped myself out of bed and went to the Universitat der Künste to see about getting work as a life model.  They said to check back next Semester.  So I will.  I am just absolutely going to keep showing up until they give me a job.
After, I went to Kottbussr Tor, a stop in Kreuzburg, because Robert had told me about a shop tht sold yarn on Oranienstraße.  It was time to buy myself a little present.  I look at buying yarn as an investment.  If I make hats, I can sell them.  But in order to sell them, I've got to have product, a spread, so to speak.
I found the shop and they had some really nice 80% wool blends on sale.  I bought a few skeins and started crocheting immediately!  I went to the Lidle and bought some wine and prosecco for the party later, then cam e home and worked on my hat while watching Harold and Maude dubbed in German.  I know the entire movie in English, so if I watch it 20 or so times in Deutsch, I think I will have a much better grasp of this language!
In the evening, people came over.  We sat around the table, talked in English and German, ate Mac and cheese and chocolate cake and drank a lot of wine.  Everyone left around midnight, which was PERFECT!

I have been in Berlin a little over 3 months, and though life is rough here, I feel a real sense of community, like the city and the people I know care for me.  They see I am genuine, that I have a good heart, a creative mind, and that I can deliver.  I make an effort here and then things happen.  Slowly, but they do.

It's the first night of Channukah this evening, but I've no plans to celebrate.  Daniel invited me to a Channukah party on Saturday night but I've been invited to leave Berlin!  I'll be traveling by train with Robert and his sister to Rostock, which is in the northeast of Deutschland to spend Weinachten with his mother and father, who speak not one word of English.  Oh my!  A bit excited, a bit terrified.  This is going to be interesting!

Posted by WhatIsWrongWithThesePeople at 1:28 PM