On Friday, Robert invited me to go to Halle, a town in East Germany with him.  I had never traveled outside Berlin, so of course I said yes.  I arranged a place for us to stay using couchsurfing.com and he arranged our transportation using http://www.mitfahrgelegenheit.de/.  We were going to see a friend of his perform at a place called The Golden Rose.  We got there early, had a beer and started talking to people.  I met a Katharina, a puppeteer working in Halle's Neues Theater to see Die hässliche Herzogin Margarete Maultasch.  I must tell you, it was one of th best puppet shows I have ever seen.  The ensemble of five worked like gears in a well-oiled machine.  They managed to not only breath life into piles of fabric and wood, but also to react to the puppets with a humanity and emotion that was true, un-fabricated.  There was a lot of text, though the play was so physical that I had no trouble understanding what was going on.  I surprised myself by understanding a lot of the language as well!  It was truly wonderful to see a group of actors so well-rehearsed, so trusting of each other.


Before the play, I had gone on a walk.  The air was so frigid it ate through my gloves and nibbled at the ends of my fingers.  But I was in a new place, with new cobblestoned streets.  The cold wasn't going to get me down.  I found this fountain, 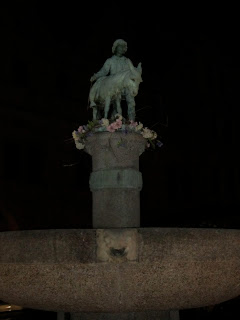 as sign that says something about garlich on Wednesday?  Not sure. 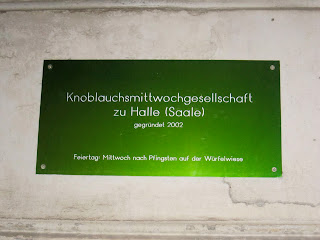 and a Beatles Museum (which was closed.) 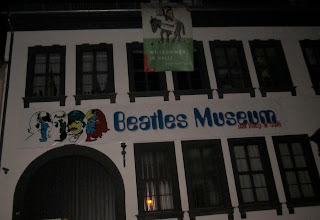 Robert's friend, Kalle, performed strange hip-hop in a big rabbit mask.  The room was smoking and crowded and the lyrics were too fast for me to get any of the language.  I enjoyed it, though.  We went to our couchsurfing hosts house around 12:15 am.  I had never used couchsurfing before, but Eve had used it a lot, and she said it was great.
Paulus met us at the door.  He was German, in his late 30s or early 40s, and a doctoral student of Philosophy.  We sat around a small square table in his living room and talked about music and performance.  I noticed he had two harps.  He said they were his girlfriend's.  He let me strum them.  It fullfilled a little dream I had had that I wasn never aware of until then.
Robert and I slept on the futon in the living room, which was absolutely comfortable, and got up at 8:30 to breakfast with Paulus before catching our ride back to Berlin at 10 am.

When we had walked to Paulus's from the tram, it was dark.  Now it was daytime and I became aware of the beautiful park next to the house in which we stayed. the broken down buildings, the Villa that looked like a minature castle.  I'd really like to go back to Halle for a day or so and just walk around, see what's there.  But maybe when it's warmer.
We got back to Berlin around 12:30 pm on Saturday.  I had plenty of time to spare before going to the Volksbuhne that night to see their free performance of "Weinachten mit der Addamsfamily."  But more about that in my next blog entry.  It's time to go eat cookies! 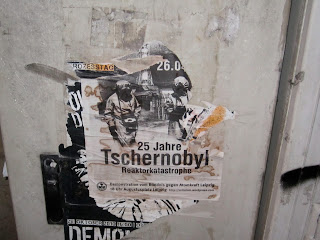 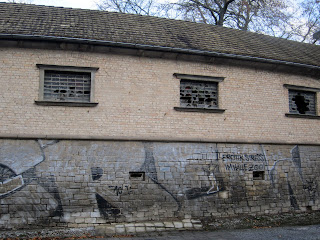 Posted by WhatIsWrongWithThesePeople at 11:02 AM