Beautiful Prague and No More Trust In the System


Robert and I went to Prague on Monday to meet my old friend Buffy, who was visiting a friend there for two days and had volunteered to haul my lime green hardshell suitcase across the Atlantic for me.  We used airbnb.com to rent a beautiful studio in Zizkov for two nights and Robert bought our roundtrip tickets on Berlin Bus Linien.  The bus ride there was quite nice.  The bus had WiFi, comfortable seats and a toilet on board.  The only stop before ours was Dresden, so the ride was a mere 4 and a half hours.  At the bus station, I changed currency, Robert bought a toothbrush and we took a short bus ride to our apartment.  Buffy, who has known me since I was 19, was there waiting for us and took us out to a delicious dinner of Budweiser (it is originally a Czech beer and it is QUITE light, bubbly and delicious) and Czech food.  I had Knedlicky, a traditional Czech dumpling and a pile of various meats. Buffy ate something that looked like spring time and Robert ate two steaks.  We three talked for a long time about, well, everything!  It was really wonderful to connect with someone who has known me so long and to introduce her to my new life.  Thanks for being you, Buffy.


The above video is this automatic toilet cleaner at a restaurant that Robert and I went to.  If I hadn't already taken care of my business, this thing definitely would have scared the crap out of me.

The next day I contacted Pavla, who I became friends with when we worked in a collaborative team at Cesta as part of the 2007 Waste Festival.  Pavla could not meet us until 5:30, so Robert and I had a day of wandering, beer drinking and eating and then met Pavla at a metro station.  We took the tram out to Sporilov, which is on the outskirts of Prague and quite different from the urban landscape we had been swimming in for the past 24 hours.  Pavla took Robert and I on a marvelous walk around Hamersky Lake with her dog Fruktas.  We went to a really beautiful Biergarten and had delicious Czech beer (Robert had wine) and food.  Mmm, knedlicky and pineapple chicken.  We continued our walk at dusk, attempting to go to a wine cellar on the other side of the lake, but when we got there it was closed.  So we kept walking.  We came across these crazy murals that Pavla said were painted by high school students and had a quick photo session, then went to some pub that was right next to a playground.  As an American, this type of thing always makes me go, "No way!"  I mean, we have to put our booze in a plastic bag when we take it outside.  And drinking on a playground?  For shame!  But it makes sense.  Your kids want to play, you want to drink beer, and now you can spend quality time with your children while relaxing after work.  Everyone gets what they want.

***I feel it is important to note that Czech beer has a low alcohol content, so you can drink a lot of it and still function reasonably well.  It is also cheaper than sparkling water in some instances.

Thomas, Pavla's partner, came to meet us as the pub was closing their outside seating.  We walked towards a restaurant that was next to our bus stop, where we sat and of course drank more delicious, sparkling Czech beer.  (It really is the best.)  After much talk we said goodbye and Pavla promised to come visit Berlin sometime soon.  It is really cool to be closer to her.  We have seen each other twice this year already!


The bus ride back to Zizkov was uneventful, but when we got off the bus we could not find our street.  After asking several really nice people with varying English language skills for directions, we finally did arrive home safe and sound.
The following day we slept in, went out for a late breakfast of eggs, fried cheese and sausage with some vegetables thrown in for good measure, took a short walk and returned our guest apartment to it's original order.  We got to the bus station at Florenc early, so decided to get some coffee at the only place around, McDonald's.

Here is where the story turns.  Remember how early on in the story, I had said that Robert bought our round trip bus tickets online from Berlin Bus Linien?  Well, he did, and we got to Prague just fine.  For this journey outside of Germany, Berlin Bus Linien had partnered with Eurolines.  So we go to the Eurolines Bus that will take us back to Germany, and the bus driver says, "Sorry, the bus is full.  You're not on the list."  I wave the tickets in his face.  "You're not on the list.  You have to take your complaint to the German bus company.  You must buy new tickets."
"When does the next bus leave?"
"Tomorrow."
At this point, I admit I flipped out a little bit.  A lot of little tiny annoying things have been going wrong for me.  First, Air Berlin lost my luggage for 4 days.  Then, my birth certificate that, all in all cost about $100 to get and send via USPS Express Mail, was lost.  DHL, supposedly a very good delivery service, just straight up LOST my mail and USPS sent me a letter saying that they had no idea where it was, either.  Isn't the reason that you pay the extra money to get a tracking number attached to your post so it doesn't get lost?  And now, the bus tickets that Robert already paid for were no good!  I was beginning to feel cursed.  I tell you, I have positively no more trust in the system.  And I'm not talking about the government.  I'm talking about trusting someone who works for an airline, a postal service, a bus line, to do their job.  No more trust.
Robert goes to the Eurolines counter to try to figure out what's happening.  Evidently, no one gives a shit that we have tickets because we are "Not on the list."  The bus pulls away and I let out an audible squeaking scream of frustration.  I probably threw something, too.  I don't remember so clearly.  I was just livid.  Robert decides he's going to handle it.  (Have I mentioned I love Robert?  He is often my hero.)  That's when we meet Mandude.  Mandude is some pretty, jockish-looking German dude of mixed ethnicity with dark skin.  He doesn't speak a whole lot of English and refuses to talk slow enough for me to understand.  If I had been by myself, it would have been a whole different story of him trying to "hey Baby" me with his macho-maleness.  Robert, who wants to be friends with and help everyone (he reminds me of my father sometimes) suggests we go find some internet access somewhere and hunt for a rideshare, including Dudeman in our plan.  We can't find anything.  Also, there are no trains until the next day.  I go to the bus station office and approach the Student Agency counter.  "Do you have anything going to Berlin tonight?"  I explain my story about how Eurolines has left us in the cold.
"There is one bus at 11:00 tonight," the blond 20-something man behind the ticket counter smiles.  He is our beautiful angel savior.
"How many seats available?"  I brace myself to hear 'only one.'
"33," says the angel.
"Moment."  I gasp breathlessly, running back to the bus station cafe as if my toes are on fire.
Robert says yes.  Dudeman follows my back to the ticket counter.  I buy two tickets.  Dudeman buys one.
We have five hours to wait and I have a big, green piece of rolling luggage, so we hang around the station.  Unfortunately, Dudeman hangs out with us.  He basically occupies my traveling companion the whole time.  Talking in only really fast German about some music festival, not letting Robert get a word in edgewise, asking no questions, and completely ignoring me.  Seriously, this guy was an ass.  I tried to understand what he was saying for awhile before I just decided to read my book.  For 5 hours.  I go to the train station once to use the toilet and get Robert and I something to eat.  I don't want to be rude and unfortunately this Dude man seems to be part of our group now, so I buy him a sandwich, too.  They are only 45 crown, which is less than 2€.  Sometimes I am too nice.
At 10:30 we go over to the platform and wait for our bus.  Dudeman sees some chick he wants to talk up and quickly abandons us.  Thank god.
10:55 and no bus is at the platform.  I am wondering if a bus will show up at all, especially because it is still not there at 11:15.  "No more trust."  I mumble.  "No more trust."  For some reason, this cracks Robert up.  I feel like Gene Wilder in the Producers when they find out that "Springtime for Hitler" is actually a hit and he's going through all the receipts of the money they owe the stock holders and just MOANING.  I couldn't find a clip of that online, but you'll get the idea of his character from this one:

I construct a story about how no bus arrives, or when it does, they won't accept our tickets either and we will have to walk all the way back to Berlin.  Robert laughs harder.  I keep telling myself everything will be fine, but all I can see in my head is more disasters of annoyance and extreme inconvenience.  Ugh.
At 11:35 the bus FINALLY shows up!  We get on it and promptly fall asleepnot waking up until a woman comes by and says, "Berlin."  It is 4:05 in the morning.  We stumble sleepily off the big yellow bus and I notice Dudeman is chatting up the same girl from the platform earlier.  Robert says that the guy has a girlfriend in Rostock that he's having a baby with.  Real quality guy you are, Dudeman.  Robert and I head to the S-Bahn.  I come home with Robert and sleep for a very long time, so thankful to be back in Berlin. 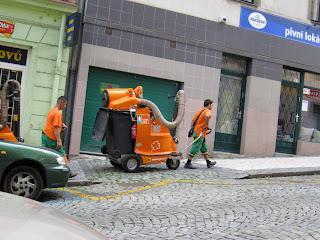 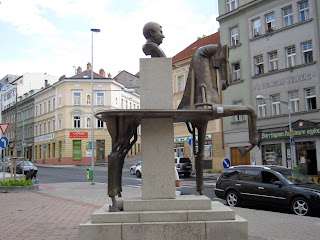 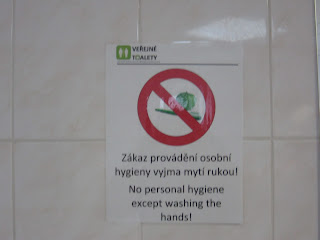 Posted by WhatIsWrongWithThesePeople at 9:50 AM