So much to report!  Firstly, I have purcahsed a new sewing machine.  Thank you to my generous donors for making this possible.  It is not as fancy as my trusty old Bernina, but it is also not as heavy and it will do the jobs I need it to do.  I am very happy about this purchase, and though I have not had time yet to give it more than a short test run, I look forward to starting production very, very soon!

On Thursday Robert was acting weird, insisting that I come over to his house in the evening evening though I had slept there the night before.  "Okay, okay!"  I was annoyed, but it seemed so important to him.  I arrived around 9:30 and a ton of my friends were there!  He threw me a surprise party!  Unbelievable!  I've always hoped someone would do that for me.  No one ever had, until now.  It was a great night of conversation and music.  I was reminded yet again that I am most definitely in the right place in the world.

I have been walking through my neighborhood lately, and though much of Wedding is highly urbanized, I have to say this place is GORGEOUS!  Right around the corner is a river and verdant greenery, birds and squirrels.  As soon as all the construction on the building is done, I think this will be a positively wonderful place to live.  Though I have liked a few of the places I have lived in Berlin, Soldinerstrasse is my favorite so far. 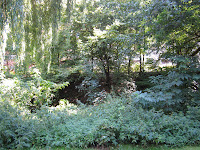 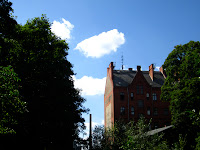 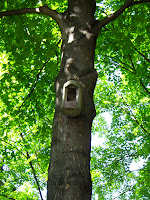 All this is around the corner form my flat.
Gorgeous!


I auditioned for a part with Wasteland Twinning yesterday and got the role.  Sometime next weekend I will be giving an improvised, interactive endurance performance, playing a character in an urban wasteland on the space behind Köpenicker Straße studios next to Kopi squat, opposite Radialsystem V next to the Spree river.  At the exact same time someone will be giving a performance using the same character sketch in Amsterdam, Holland.  The event will last about 5 hours.  It will be difficult but worthwhile.  At the end of it all, I will sleep for a very long time. I am VERY excited about this bizarre and unique opportunity.

And lastly, it has been HOT in Berlin!  Really hot!  I have been wanting to go swimming in one of the many lakes here in Berlin since I landed, and have not been able to find the time.  Yesterday there was a small party called "Queer Beach" at Müggelsee.  Robert and his friend Tobi and I went in the evening, around 8.  I had only been there about 5 minutes when I decided it was time for a swim.  Though the twilight air was beginning to cool, the water was quite warm.  I tore off all of my clothes and ran in.  How marvelous, to swim naked in a lake while the moon is rising and the sun sets.  Robert joined me and after cavorting in the lake for a bit, we dried ourselves off, joined Tobi on the blanket and ate sausages.
An excellent evening.

I'm sorry to say I forgot my camera for both my surprise party (but how was I supposed to know?) and Queer Beach, still, I hope you enjoy the few photos I have included in this blog.


These two photos are total non-sequitors, but I didn't have anywhere else to put them.  Firstly, there is a Yoga room at SFO International?  Oh, San Francisco, would you like soymilk with that?  Also, when you only have 3,30€ in your pocket and are hungry, breakfast at Sharky's Cafe on the corner of Osloerstrasse and Koloniestrasse can't be beat! 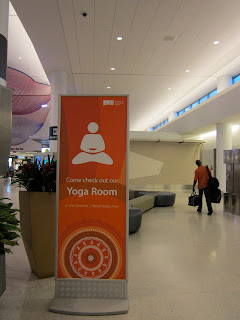 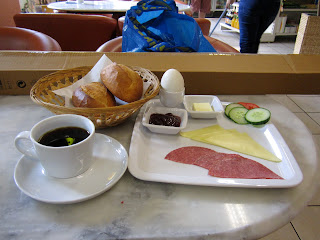 Posted by WhatIsWrongWithThesePeople at 10:33 AM