Together At Last: HE at Barbie Deinhoff's 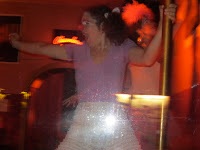 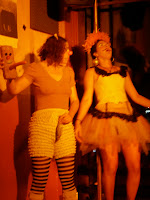 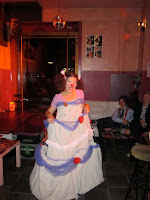 On Saturday night Eve and I had our first gig together in Berlin at a small queer cafe in Kreuzberg called Barbie Dienhoff's.  We got there early and were welcomed by a tiny square stage and a backroom with mirror and lamp.  This was also the beer storeroom so it was a little cramped.  Neither of us are at all a princess, so this was just fine with us.  We got ready and then sort of hung out.  We were not scheduled to go on until at least 10, and it was only 9.  The bartender, a French guy named Valentin, was positively adorable and delivered drinks to us in our dressing room."
So what, I ask you, are two clowns locked in a beer storeroom to do?  We took it to the streets!  Sharon and Daniel showed up with Daniel's aerialist partner, Asia when Eve was directing me to get up, sit, do 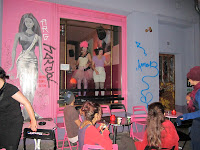 things outside. The fun just began!  I feel that our friends being there helped fuel our bizarre walk-around street performance.  They played along as we pole danced in the window and strutted on the street, Eve taking sips of people's beers and me pulling limes out of my pants.  The lovely Sadie Lune showed up, which made me very happy.  For some reason, that lady always puts a smile on my face.
Around 10:30 we finally began. Eve danced to get the crowd interested and then brought out me in the big cake puppet.  We had been working the cakedance a lot, and discovered some new things, and I am happy to say that it finally works!  I had a lot of fun performing with Eve.  I love our partnership, the way we trust each other and can bounce off of each other's cues, but something happened for me onstage during my last solo number.  Something bizarre and unexplainable.  A chapter closed. 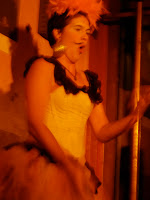 For as long as I can remember, I have been creating work that is somehow about gender and sexuality.  These have been the themes that have been driving me, making my creative wheels turn, giving me my edge.  I am shocked to say that at age 35 (I'll be 36 in December) I think I am done with these topics exploring these topics in the ways I have been.  I am still interested in the way people develop, in what we are attracted to, and I will always and forever consider myself a part of the queer and transgendered community, no matter who I date or what my own personal gender identity may be, but I don't think I am interested in talking about it onstage at the moment.  This is a real shock to me!
And now my question is, what is next?

I have a polka-dot apron.  Yesterday I put it and my nose on and met Eve, Daniel and Sharon at Boxhagener Platz fleamarket, where we were going to busk.  But instead of playing like a clown, I ended up twisting balloons.  I guess this is what I do when I busk.  I made about 12 Euro in a few hours.  Not great, but not horrible either.  The apron,though.  It changed things for me.  Feminine and domestic, this fashion article brings a new light to making a dog or a lion out of a tube of latex, a creation of something from nothing.

Later on, I had a gig at Scheinbar, where I would put my nose on and sing "My Man," a song written for American Vaudeville star and Jewish icon Fanny Brice.
Again, the apron!  The song, me, my presence was changed by this old-fashioned article.  And I am no
t going to resist the new costume.  Where can I go with this new feeling?  I wonder?

One other performer I must speak of at Scheinbar (get ready):  Frank Sanazi.  www.franksanazi.com
I don't remember the last time I laughed so hard.  Wow.  This kind of comedy takes some real chutzpah.  It was awesome.

I actually managed to get home at a reasonable hour and get some sleep.  Today I had plans to go busk by the museums or Brandenberger Tor because it's a holiday and the museums are closed, so the place will be crawling with tourists, but honestly, I have been working really hard and am beginning to feel slightly rundown.  Maybe I'll take a day off.
Posted by WhatIsWrongWithThesePeople at 10:01 AM