Rosh Hashonnah: Not So Traditional After All

On Thursday Eve and I rehearsed in a small park in Prenzlauerberg.  I don't remember the name of it, but it's a strange little spot on Papalallee that is a park, playground and cemetery with a theater next to it.  I tried on Eve's moustache and became Boris.  I wonder who this guy is.  I think he is part walrus.  I'd be interested to play around inside him and see what happens.  He is either a cowboy or some sort of lazy cop.  In any case, he is confused. 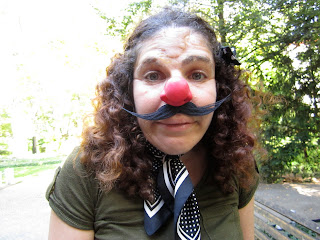 After rehearsal, I went to Eve's place.  She is living on the top floor of an old squat that is now a flat with roof access.  I am hoping that I can move into her room when she goes if I do indeed figure out a way to stay.  The place is amazing, a little gritty, high ceilings, art everywhere.  On the balcony is a miniature/forest, swampland, complete with DIY pond.  The roof is accessible by ladder and gives a beautiful view. 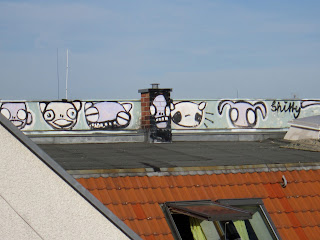 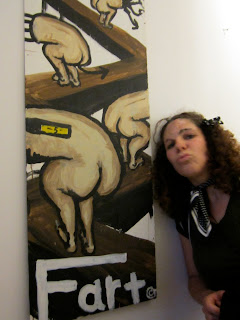 We bask in the sun for a bit and then I have to come back to Neukölln for a tandem speaking appointment.  S-- a friend of B--'s, is working on her English and has agreed to help me with German.  At 6 the bell rings and I invite Simone up.  She is a stout woman with mannish haircut, and a slight left-side deficit.  Her eyes are firey and she has a warm smile.  I like her immediately.  We figure out how we will structure our time.  An hour of English, and hour of German.  Perfect.  She speaks enough of my language to have a conversation.  She asks me about clown and I tell her about the idea of the other.  We talk about Artuad.  She is working on a writing project called "Handi-captured" challenging notions of disability and looking at how every person has deficits and is able-bodied at once.  She says she is an in-between person.  Due to certain things that have happened to her, she cannot do things that she used to with out help, but she is an independent and strong woman, and likes to do most things by herself.  I tell her a little bit about me.  She asks me to write a one-page story for the project.  My deadline is the 12th of Oktober.  Yes!

At 20:30 she goes and Daniel rings the bell.  I get ready to go to this Rosh Hashonnah celebration, trying to look nice, conservative.  I did not bring so many clothes with me, so this is not an easy task.  The woman having the party is orthodox, which makes me nervous, but I will be with my friends, people I trust.  They will keep me safe and comfortable.
Before we go to meet Sharon at Hermannplatz, which is about 3 blocks away, Daniel looks at the directions in his email.  Of course, they are in Hebrew, so I can't read them.  We walk to Hermannplatz, Daniel chattering playfully and me a bundle of nerves and caffiene.  I begin to smile in spite of myself, and by the time we get to the plaza, I am dancing to music in my head.  Sharon arrives in a huge bicycle with a seat on the front.  "Get on!"  He says in his authoritative tone.  I laugh and decline.  We shove each other around a little bit.
We try to figure out where we are going.  The directions say to take the U-7 to Nuekölln station and then walk to some address.  It's written in Hebrew.  I have no idea what it says, so I just say, "Okay!"
Daniel and I hop on the train.  Sharon pedals off.  He'll meet us there.  Outside the station, we reconvene under a bridge.  I pull out my map and we look for the street we are supposed to go to.  It is nowhere.  Sharon takes the map, turns it over to the list of street names, stares at it.  "I never remember the order of the letters."  He says, handing me the map, "Can you find it?"
This shocks me for a moment.  Sharon has a brilliant and complex mind, speaks two languages fluently (Hebrew, English.)  But it makes sense. Both he and Daniel grew up with a separate alphabet.  I keep finding myself in these situations where everyone has something separate to contribute of equal importance.  All auslanders (foriegners), we all sort of need each other.
I find the street and the location on the grid.  It is on the other side of Berlin.  What to do?  If we try to go there now, we won't get there until midnight.  We can't call the host because she cannot pick up the phone due to it being the high holy days and her being orthodox.  And we are hungry.  We begin to walk.  "No sausage."  I request.  "I've had enough sausage."
"Oh, but this is traditional food for Rosh Hashonnah." Sharon chides.  (Sausage is pork.  Do the math, goyem.)
We don't want döner.  We don't want shawerma.  We want pizza.  "Harvey,"  Sharon says in his commanding voice.  "Use your powers.  Find us pizza."  We walk along.  I focus on pizza.  After 3 blocks, it appears, but it is pricey.
"Sorry. " I say.  "I forgot to focus on cheap pizza."
Daniel begins to chant, "Cheap, cheap, cheap."  Too more blocks and voila!  2 euro pizza! 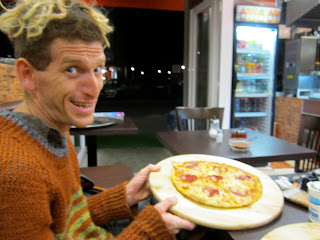 I get a margarita pizza and the Israelis both get salami and cheese.  Our pies come.  "Shana Tova," we all say and laugh.  Not only is salami unkosher, but they are eating it with cheese.  After, I want to go to a park.  I have a few bier in my backpack and, hey, it's new year's.  We walk and talk about all kinds of stuff.  Life, death, the soul, what it is and where it goes, pick up Daniel's bike, which is by my place. Eventually we reach Templehof Freiheit, only to find that it's closed.  We sit on the side of the bike path.  It's woodsy.  Sharon pops open the bier with his lighter, Daniel stretches out on his back.  I here rustling in the bushes and turn to my right. A fox is staring at me!  It is still, we are still.  Sharon moves his leg and the fox darts back to his hidden safety.  I feel magic in the air.  "Shana Tova!' Sharon and I clink bier bottles and Daniel's plastic one filled with water.
We finish our biers.  Again, Sharon tells me to get on the front of the bike.  I acquiesce and get a ride home.  "Tchuss!"  I yell after the boys.  Daniel has sped off ahead. "Good night, Harvey!"  Sharon's voice trails off as he pedals toward his home at the circus.
My first observance of the Jewish New Year.  Nice!

We have plans to go hiking in the forest for Yom Kippur.
Posted by WhatIsWrongWithThesePeople at 5:32 AM