I have been low lately.  Really, really low.  The days grow increasingly shorter and it is COLD in Berlin.  Before last year, I had lived ever winter of my life in California.  Last winter, I was floating on the wings of falling in love.  This year I the encroaching winter and lack of sunlight has hit me like a brick in the face.  I have started going to the Sonnenstudio when I can afford it, not because I want to get tan, but because I NEED LIGHT! Seasonal depression combined with stressful financial situations ( I need a job, badly) means I don't manage to go out a lot, but I am trying to change that.

On Friday night I went to a dance/music collaboration that made me roll my eyes a little bit.  Their were two separate collaborations.   The music was emo and than electonica, and in both cases the dancers where contemporary/improv.  I tried really hard to be engaged with the performance, but I felt like I was back in graduate school, trying to come up with something positive to say about "art."
Let me be clear.  It was not bad performance, I just didn't like it.  It didn't relate to me at all, and I couldn't relate to it.  Try as I might (for years now) I just do not like contemporary dance.  Or at least, I haven't yet.  But it felt good to get out and see something. 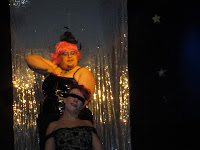 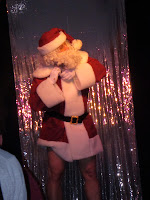 Last night I went to Trash Deluxe, a night of queer and drag performance at a venue called AHA in Schöneberg.  I arrived about 10 minutes early and the place was packed!  Usually when I enter a crowded venue, I get a little anxious.  (Okay, lately I suffer from crushing social anxiety, but I'm trying to keep it light!)  Here, even as I was squeezing past people, I knew I was home.  Queers, trans folk, modern primitives, this was the throng of folks I was enveloped in.  And I liked it.  No one was going to treat me like a girl.  No one was going to assume anything about me, judge me on my scars, my clothes, my body.  I found myself in conversation with a pierced up, leather-fairy looking man (?) named Michael who was as sweet as pie.  He told me about an event his ensemble "Lick Me Happy" is doing next Saturday, describing it as "Queer Monster Performance."  All I can say is, I'm there!
The performances starting with a rather ritualistic drag act to "Carmina Burana" of all things.  There were stilettos, neutral masks, and lots of glitter.
The performance was about 3 hours long, with a 20 minute break in the middle.  Most of the acts were traditional drag, lip syncing with a focus on dance and gender illusion, although there were two poets, 2 singer/songwriters, and one vocalist who blew me away with his version of Bill Withers's "Grandma's Hands".  (If you click the link, be warned that Bill Withers has some rather dated and hetero-normative sentiments about homosexuality which I don't support, but I don't find his banter intolerant.)
Some of the acts were skilled, some were well-rehearsed, some were rather thrown together, but all followed the same thru-line.  Gender is nothing more than a performance.  All gender is drag.  It doesn't matter if you are a man acting how you think a man should act, a trans-woman doing male drag, what we think of as the traditional drag queen, or something totally ambiguous right in between.  When you subscribe to gender behaviors, gender behaviors that traditionally go with your biological sex, gender behaviors that are believed to be opposite the parts in between your legs, whether these behaviors are small and subtle or overblown to the size of camp, what are you doing but performing conformance or non-conformance to another person's idea of what you should be?


One of the few English-language phrases uttered onstage last night (after a fabulous "belly dance") was "Fuck lookism."  Lookism is not just about fat or thin, pretty or ugly.  It is about viewing someone based on their appearance instead of what is inside of them. 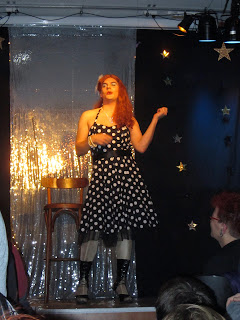 Posted by WhatIsWrongWithThesePeople at 3:57 AM